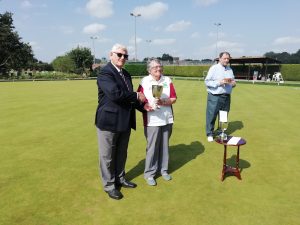 On Sunday 05 September 2021, the North Elmham & District Bowls League held their Cup Final at Lyng bowls green.  After the cup final, trophies were presented to the league winners of the 2021 season.

Bintree Bowls Club were winners of Division 1.  We finished level on points at the top of the league with Elmham Institute on 107 points but were declared winners because we had a better shot difference of 2 shots.  Our team captain, Pat Alden, was presented with the trophy and £40 in cash.  Other members of the club were also present and a team photo was taken with the trophy.