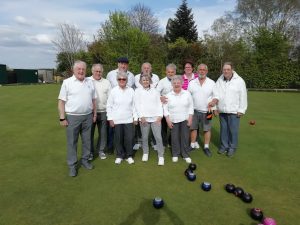 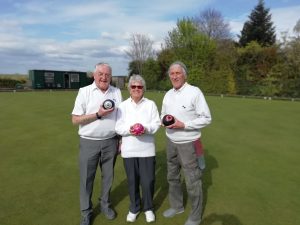 The outdoor season has finally arrived. On Sunday 01 May 2022, we organised an Opening Day roll-up with a little round robin competition with rinks of 3 players per block drawn out on the day.

12 members turned up which made 4 blocks, playing each other over 6 ends per game. The first 2 rounds were played prior to a break for tea/coffee and cake followed by the final round. With 2 wins and a draw, champions on the day were Frank Moore, Jan Hockley and Alistair Hunter. What was meant to be an opening day friendly roll-up turned into a fierce competition with much at stake hehe !!!!

Many thanks must be given to Dave Beresford for organising the competition, Betty and Ruth for preparing and serving the coffee break and to Frank for organising a spider competition to open the afternoon. This was won by Dave Garner who was presented with a bottle of drink, kindly donated by Frank.

We can now look forward to the league season with our first game to be played at home on Wednesday 04 May against Elmham Institute in the Elmham League.